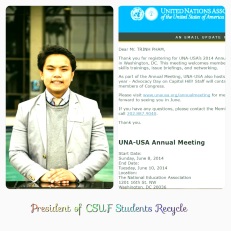 At the age of 14, Trihn “Sky” Pham left his home to become an international student of finance, management and altruism.

“I promised myself everywhere I go, I’m going to contribute to that country,” Pham said.

Having lived in the United States for only three years, Pham has already set an impressive track record by organizing events, such as restoration days at Orange County parks and canned food trick-or-treating drives.

Originating from Ho Chi Minh City (Saigon), Vietnam, Pham was born in the region’s rainy season, fall. With rainfall inundating through a leaf-sheltered ceiling and flooding floors, a newborn may have seemed like an overwhelming addition to an already stressful situation.

Pham’s mother, a wool farmer, and his father, a freight cyclist, taught him early in his life the business ethics he employs today.

Over the next 14 years of his life, the Pham family would undergo upward mobility—from lower to middle to eventually upper class—through entrepreneurship, expansion and ethics.

From the beginning, Pham, well-mannered and genuine, spoke of the appreciation he holds for his parents. Their hard work and dedication gave him the opportunity to travel across the sea to carve out his path.

He understands that his parents are the catalyst to the change he wants to bring.

Pham attended secondary school at Wellington College in New Zealand. Through this institution, Pham organized projects with the Blue Dragon Foundation, a grassroots charity that delivers aid to children in Vietnam.

His most notable fundraiser during his school years at Wellington College was an international week where multicultural dishes were crafted and sold with all of the profits going to the Blue Dragon Foundation.

While he studied, Pham joined the working world by obtaining a series of tough dishwashing jobs at local restaurants in Wellington, the nation’s capital. The last dishwashing job he held eventually evolved into a serving position that helped him develop fluency in the English language.

After finishing high school, Pham set his sights on continuing his education at a university.

Ever since his childhood, Pham dreamed of becoming a doctor.

However, that aspiration was suddenly disturbed when he received a rejection letter from his dream school, the University of Otago Dunedin School of Medicine in North Dunedin, New Zealand.

One of Pham’s professors understood the crushing awakening that rejection can bring and turned a heartbreak into constructive criticism. She told Pham that although his natural talent may not be in medicine, his artistry is clearly vested in business.

It was a fitting judgment for Pham; after all, he had been studying Mandarin Chinese.

After receiving that insight, an idea was born: build a hospital and create a center for doctors.

After that, Pham took a year off after high school and went back to Vietnam to explore a bold business venture with his father. He actualized coffee.

Inspired by the climate change initiative in Copenhagen, the creation of a company selling naturally grown coffee and packaging it with recycled materials was born. Pham said Copen Coffee, a Vietnam-based firm, is now expanding and testing the foreign markets.

Through witnessing circumstantial steps needed to start a business, Pham reassured himself in his natural aptitude for business and began the search for a university revered for its management and finance colleges.

He nearly accepted admission to Pasadena City College, but at the last minute he impulsively decided to head to Orange County.

Pham went to CSUF as blindly as he was unprepared. At 18 years old, it was the second time in his life that he knew absolutely no one in a foreign land, like leaving Vietnam for New Zealand.

He had no friends, no family and no SIM card.

After buying a new SIM card at the airport, he picked up the local newspaper, took a look at the classified section for a room to rent and hailed a taxi to take him to his new home.

With hardly any downtime after settling into his new place, Pham joined the CSUF Students Recycle Club within the first couple weeks and has only added to his extracurricular activities since. He also joined the CSUF Entrepreneur Society, where he eventually become the vice president of Marketing and Finance.

Within two semesters with Students Recycle, Pham introduced a 2,900 percent increase to the organization’s annual budget. From recycling bottles, fundraising and the Inter-club Council subsidizing money into a gas budget when the club travels to soup kitchens to volunteer, the club’s budget rose from $50 to $1,500.

This past summer, Pham held two internships, one at TDL International Law Office and the other at Fountain Valley Chamber of Commerce, which led to a promotion into the chamber’s social business director position.

Pham will be graduating in the next two years. His long-term goal after graduation is to explore more eco-friendly ventures and ultimately create a multi-disciplinary hospital and school back in Vietnam with his father.